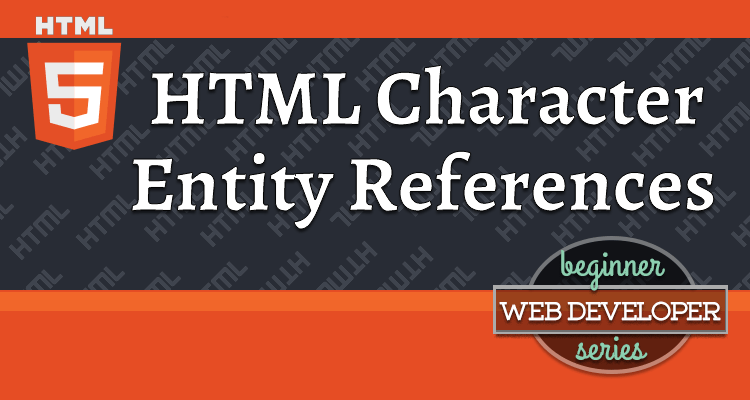 First things first. What IS an HTML Character Entity Reference?

The general format of an HTML character entity reference is &, followed by some code, followed by ;, without any spaces in between.

For example, if you place &copy; in your HTML code, the browser will display the copyright symbol ©.

Like any language, HTML has a set of special characters which browsers recognize as part of the HTML language itself. For example, browsers know that when they encounter a < character in the HTML code, they are to interpret it as a beginning of a tag.

Thus, the < character is a reserved character. It’s reserved by the HTML language as having special meaning, i.e., signifying the beginning of a tag.

But what happens when you want to use one of those reserved characters as part of the content of your document, not as part of the HTML code that dictates the structure of the document?

We need a way to tell the browser not to interpret them as HTML code, but as regular content.

There are 3 reserved characters that should always be substituted with their corresponding entity character references.

Let’s take a look at the following HTML document (html-entities-before.html). (This document contains one of my favorite quotes from Theodore Roosevelt):

However, besides that great quote, pay attention to the fairly weird-looking content wrapped in the <h1> tag. (Obviously, that’s not part of the quote. I made it up just for this example.)

Let’s take a look at how this document renders in the browser:

Hmm… A good portion of our heading has disappeared!

In fact, it didn’t disappear.

The browser was interpreting the content of the <h1> tag when it stumbled upon the < character.

“But what tag is that? <then? What is that? I guess, I better keep going to see if I can find the end of this opening <then tag.”

“Found it! It’s the closing tag character >, right in front of >more”

“I have no idea how to display this <then> tag, so I guess, I’ll just skip rendering it to the display.”

And that’s how we ended up with the heading Don't be afraid to be more: instead of what we actually wanted.

Let’s fix this by substituting HTML character entity references instead of the reserved characters <, >, and &.

Here is html-entities-after-1.html rendered in the browser:

If you are looking at the Elements tab of the Chrome Developer Tools (CDT), you may be fooled into believing that regular reserved characters (<, >, &) are being used in the content, and not the HTML character entity references.

For example, take a look at the heading of html-entities-after-1.html displayed in the CDT: 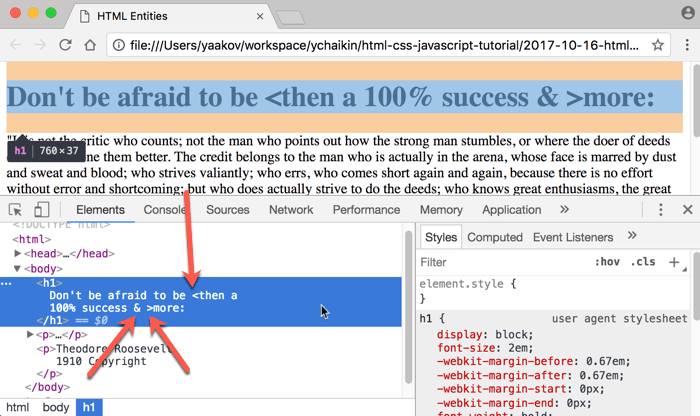 Don’t be fooled by this!

To see them, right-click anywhere on the page (without selecting any content!) and choose View Page Source menu option. The raw HTML code will be displayed as shown below: 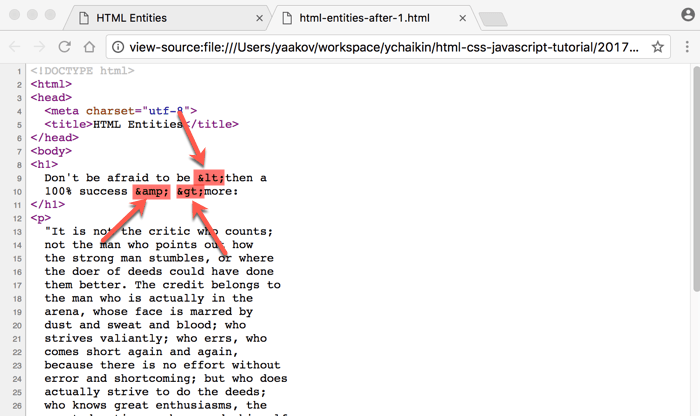 Not On My Keyboard!

Another reason HTML character entity references exist is provide us with the ability to quickly output special characters not readily available on our keyboards.

One such character that is used quite often is the copyright symbol or ©.

The character entity reference code for © is &copy;.

Let’s augment our Roosevelt quote HTML document by placing the copyright symbol as part of the copyright line at the bottom of the document (html-entities-after-2.html):

Now, the browser is showing the © symbol next to the year:

I would be remiss if I didn’t mention another very commonly used HTML character entity reference, &nbsp;, also known as the non-breaking space.

Let me explain what &nbsp; does with an example.

Take a look at the heading h1 of the following document (non-breaking-space-before.html):

Shown below, as I decrease the width of the browser window, you can see that, word by word, the browser is wrapping the heading text onto the next line:

As you can see, the entire heading does not fit on one line. The browser wraps the heading, word by word, onto the next line.

Note that the browser does not wrap the content character by character and it shouldn’t!

How weird would it be if the line of text ended with tutorials that ar and continued on the next line with e crystal clear?!

But take a look at the ugly wrapping that happens when we get to the ( amazing ) part of the heading. One of the parentheses wraps onto the next line, leaving the part enclosed in the parentheses on the previous line:

We have a dilemma. On one hand, we’d like to keep the spaces between the word amazing and the parentheses around it. On the other hand, we need to keep the whole thing ( amazing ) as one word, without allowing the browser to break it apart using those spaces.

Hey! It’s almost like… wait for it… we need non-breaking spaces or &nbsp;!

Note that there are no regular spaces around the word ‘amazing’: (&nbsp;amazing&nbsp;).

I’ve mentioned several times in this series of articles (e.g., Anatomy of an HTML Tag) that HTML ignores extra spaces.

You can place 100 spaces between two words in your content and the browser will still display just one space.

It would seem that the non-breaking space character entity reference gives you the power to overcome that rule.

Just place 100 &nbsp; references one after another, right?

While that will somewhat work, it’s a total misuse of this entity reference. The &nbsp; is meant to do one thing: substitute regular space characters so that the browser doesn’t break up content in an undesired way. It is not meant for expressing margins within your text.

(If you wanted margins in the middle of a sentence, you would wrap that content with a <span> tag and apply margin-left: 20px; to that <span> or some such, but we haven’t covered that yet in this series.)

The quote or &quot; is another character entity reference that is commonly used as part of the value of an attribute of an HTML element.

(If you don’t remember what an HTML attribute is, see my article Anatomy of an HTML Tag.)

For example, we can place a title attribute on the <h1> tag (html-entities-after-3.html):

Pay attention to the opening <h1> tag. Since attribute values are usually enclosed in quotes, we can’t simply leave the quotes in the attribute value like so: title=""Not the critic"".

The browser would consider the second quote in title="" as the closing quote. Then, the browser will see the next set of characters, Not the critic"", as an invalid attempt at specifying another attribute.

So, one solution is to use the &quot; entity reference instead of the " character in the attribute value.

Another solution would be to use the fact that single quotes and double quotes are interchangeable in HTML. The same title attribute can then be written as title='"Not the critic"'.

With either solution, the by-product of specifying a title attribute on an element is that hovering over that element shows a tooltip with the value specified in the title attribute, as shown below.